Cape Girardeau has quality art down to a science, with colorful murals throughout town!

The Mississippi River Tales Mural is the largest and most dramatic of Cape Girardeau’s murals and is located on a portion of the downtown floodwall.  Covering nearly 18,000 square feet, this 1,100-foot-long mural features 24 historically-themed panels that vividly portray Cape Girardeau’s rich history and heritage; descriptive markers provide an explanation of each panel.  This interactive Mural Mania quiz is fun to fill out as you stroll along the mural!  Panels were refreshed in July of 2015 and provide for a lovely walk along the mural. The mural was created by Chicago artist Thomas Melvin, in collaboration with several local artists and was dedicated at a public ceremony on July 7, 2005.  Map it.

Inside the River Campus, Missouri artist Gary Lucy’s Inland Waterways Mural celebrates the Mississippi River during the era of the steamboat.  Map it. 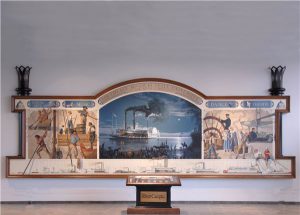 The founding of Cape Girardeau is depicted on the 40×22 foot Bicentennial Mural and was dedicated to the city on its 200th anniversary; the mural is located on the Fountain Street side of the Vasterling Building. Map it. 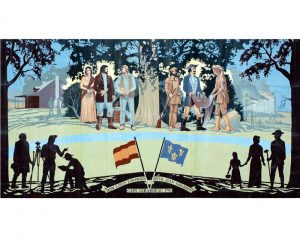 Get a full listing of the dozens of murals found throughout Cape Girardeau in the Cape Arts Council’s fantastic Public Art booklet, available for download on their website!

Thanks for your interest. For more information, call us at (573) 335-1631 or email at aphares@visitcape.com